Are you looking for a sleep apnea treatment that can cure your apnea, not just reduce its impact? And what if that treatment could also straighten your teeth, improve your chewing, and even improve your facial appearance? That’s what the DNA appliance can do. The DNA appliance is a holistic approach to sleep apnea treatment that strives to correct the underlying cause of the condition and establish a healthy, attractive bite structure.

To learn whether the DNA appliance is right for you, please call (408) 354-5600 today for an appointment with San Jose sleep dentist Dr. Nancy Nehawandian at Top Down Dental in Los Gatos.

Benefits of the DNA Appliance

The DNA appliance is a different approach to treating sleep apnea. While most oral appliances focus just on holding your jaw in the proper position to keep the airway open, the DNA appliance takes this one step further: the goal is to reshape the jaw so your airway is naturally more open. Hopefully, then, you won’t need to use an oral appliance in the future.

This holistic approach to treating sleep apnea offers many benefits over other treatments, including:

The DNA appliance is a different approach to treating sleep apnea, one that may work for people who haven’t had luck resolving snoring or sleep apnea with other oral appliances. 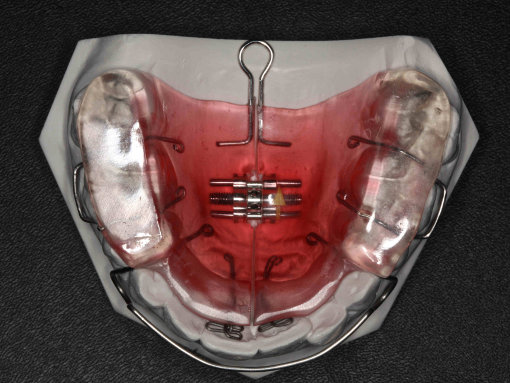 A Common Cause of Obstructive Sleep Apnea

The root cause of obstructive sleep apnea is an airway that collapses during sleep. Because the upper and lower jaws are the primary bony supports for the airway, we can often look to these structures as the cause of the narrowing and collapse.

Another problem that makes airways susceptible to collapse is narrow jaws. This makes the airway smaller, more restricted to begin with. Mandibular advancement can help, but it may not be enough, especially if the primary site of airway collapse is in the upper airway, caused by the soft palate.

The DNA appliance doesn’t advance the jaw, it reshapes it. By broadening the upper and lower jaw, it can expand the airway throughout–even in the nasal passages. This can resolve snoring and sleep apnea anywhere in the airway, from the nose through the mouth to the throat.

How the DNA Appliance Works

The DNA appliance works by expanding the arches of the upper and/or lower jaw. After an initial assessment, you’ll be given a custom-crafted oral appliance that fits over your teeth. You may receive an appliance for your upper jaw, lower jaw, or both. Sometimes you will start with one appliance, and receive a second appliance later.

You’ll wear this appliance for much of the day, perhaps 16-24 hours, depending on the current state of your jaw and your treatment goals. You’ll take it out for eating and cleaning your teeth.

The appliance has midline screws that allow it to be expanded. You’ll turn these as directed to gradually apply outward force on your arch. In response, your body will grow additional bone and allow your arch to change shape. When treatment is complete, which takes up to a year, you’ll have a significantly expanded jaw.

This expanded jaw will give you more room for teeth, so it’ll eliminate crowding. It will also make your smile better fill the space in your mouth, eliminating large, dark buccal corridors. And you’ll notice that your face is less sharp and narrow. This may have the effect of helping you look younger, healthier, and more attractive.

If you want to learn more about the DNA appliance in San Jose, please call (408) 354-5600 today for an appointment at Top Down Dental in Los Gatos.