Tinnitus is a condition that can be very hard to live with. In fact, people with tinnitus tend to suffer very high rates of depression and stress.

For many people, tinnitus is a source of significant stress, but sometimes the opposite is true. About half of people with tinnitus can trace its origins back to a stressful time in their lives, and about half of tinnitus sufferers (not necessarily the same ones) say that their tinnitus worsens during periods of elevated stress. 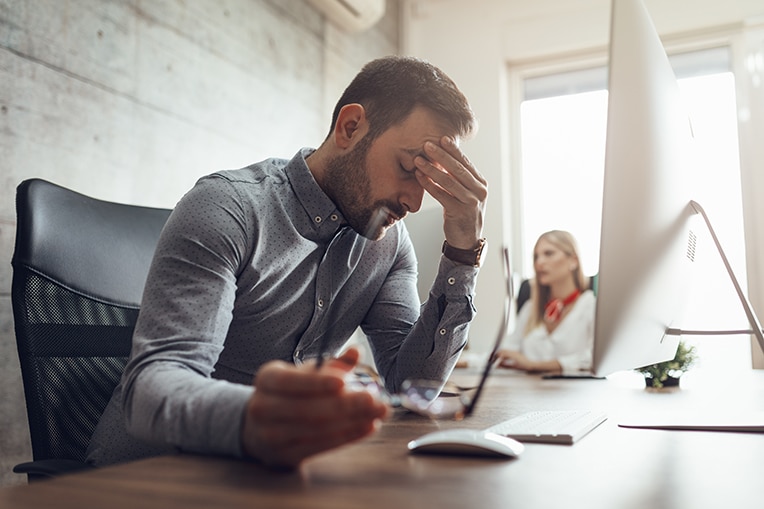 The Link between Tinnitus and TMD

For many people, it seems a stretch to link a jaw problem with ear symptoms, but there are actually many close ties between your jaw and your ear. First, the inner ear is housed in the temporal bone, which is the “temporo” part of the temporomandibular joint. That’s what allows you to play a record with your teeth and allows molar mikes to function.

In addition, two of the bones that currently make up our inner ear have their evolutionary origin as jaw bones. They retain many muscle and nerve connections with the jaw.

So when there are problems with jaw dysfunction, it makes sense that we might experience sounds that other people can’t hear. These could come from muscle tension, pressure on the jaw, or other sources.

If tinnitus is linked to TMD, it could easily explain why the symptoms worsen with stress. For many people, one way they manifest stress is by clenching their jaw. This can increase all symptoms of TMD, including tinnitus.

The type of TMD most linked to tinnitus is actually related to muscle tension and muscle pain in the jaw joints. This is also the type of TMD that is most strongly linked to stress and clenched jaws.

Does TMD Contribute to Your Tinnitus?

If you suffer from tinnitus, it’s a good idea to learn whether TMD could play a role in your symptoms. It’s especially likely if you also get regular headaches (probably tension headaches, though they’re sometimes diagnosed as migraines). And if your tinnitus tends to flare up when you’re stressed, it’s quite likely that TMD could be a cause.

If TMD does contribute to your tinnitus, it’s very good news. TMD is often very treatable, especially if it’s linked to muscle tension–and the treatments can be very noninvasive. An electric muscle massage, TENS, is often used as a starting point for diagnosis and treatment–it can provide immediate relief for many people and may be the only treatment you need. For other people, wearing an orthotic at night can help. Few people need more treatment than that.

If you’re in the San Jose area and want to learn if your tinnitus is linked to TMD, please call (408) 354-5600 today for an appointment with TMD dentist Dr. Nancy Nehawandian at Top Down Dental in Los Gatos.