Play a Record with Your Teeth to Understand TMJ Ear Symptoms

For over 100 years, the phonograph record was the dominant form of music recording. Now they have become out of date, and they’re vanishing, along with the players necessary to enjoy them.

Fortunately, with a little ingenuity, you can play a record without a player, and you can even play it with your teeth.

Playing a record with your teeth isn’t just a fun experiment, it can teach you about the link between TMJ and ear symptoms like ear pain or tinnitus. 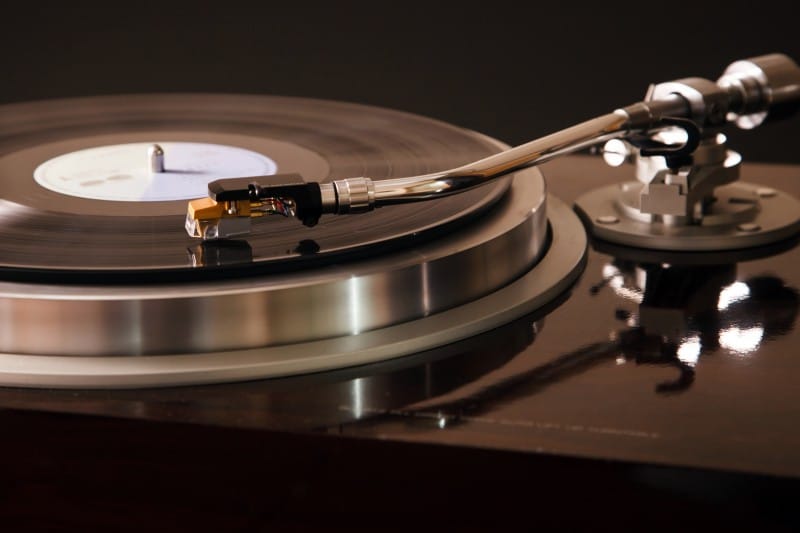 Gramophones: Analog Data at Its Finest

Rotating records use a very simple process to reproduce sound. Since sound is just vibration, the pattern of that vibration is etched into a disk along a groove. When a needle is introduced into the groove, and the record spins, the needle bounces up and down, following the same vibration pattern that was used to create the initial record.

This is what we describe as analog data: the data itself (the etching on the groove) is similar (analogous) to the thing it’s recording.

Recreating Your Own Record Player

You can actually play records without a player using a paper gramophone or your own teeth. First, you need to work out how you’re going to spin the record. A pencil works well. Put a rubber band on a pencil, wrapping it around several times to make a reasonable stop that will keep the record in place. Then put pencil through the record, and put a second rubber band on the other side of the pencil to hold the record firmly in place.

Now it’s time to build your player, either a paper gramophone or a tooth player.The paper gramophone will follow the same principles as the original gramophones, before electronic amplification was used to make the sounds louder. Simply take a piece of paper and roll it into a cone. Now attach a pin to the narrow end of the cone. Place the pin in the groove on the record and spin. You should hear sound coming out of the cone.

Most records were designed to spin at 33 ⅓ revolutions per minute (rpm). It takes practice to get the speed right, so you’ll notice that the music sounds either too fast or too slow at first.

If you think the description of music playing in your ear that no one else can hear sounds an awful lot like tinnitus, you’re right. It is like tinnitus, and it helps us understand how TMJ can cause tinnitus.

You see, the reason why this music player works is that your jaw is connected directly to the bone that houses your inner ear. It’s call the temporal bone, as in temporomandibular joint as in temporomandibular joint disorders or TMJ (mandible is the scientific name for your lower jaw). When your mandible puts excessive pressure on your temporal bone, it can cause vibrations that you perceive as sound. It can also cause a compression of ear tissues that you perceive as pain or as ear fullness.

TMJ can also cause tinnitus and ear pain by putting pressure on nerves around the ear, which don’t enter the skull directly, but travel downward, past the temporomandibular joint, to enter the spine.

Many people with tinnitus that isn’t related to ear trauma (such as exposure to loud noise) find that their symptoms are caused by TMJ, and that TMJ treatment dramatically improves their symptoms. If you would like to learn whether TMJ is causing your tinnitus in San Jose, please call (408) 354-5600 today for an appointment with TMJ dentist Dr. Nancy Nehawandian at Top Down Dental in Los Gatos.