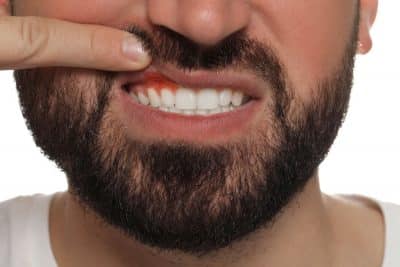 Almost half of American adults may be living with some level of gingivitis or periodontal disease. The risk of gum disease increases with age, with more than 70% of people over age 65 having symptoms of gum disease. Estimates suggest that San Jose might have slightly lower gum disease levels than the US overall, although not so much that we can get complacent.

Many may not even realize they are brewing serious inflammation and/or gum infection within their own mouths. However, once gum disease is diagnosed, a common question is “Is gum disease contagious?” The answer is slightly more complicated than you may expect.
The most important thing to understand about gum disease is that San Jose holistic dentist Dr. Nancy Nehawandian can help you avoid developing damaging forms of the disease.

What Is Gum Disease?

First, it is helpful to understand exactly what the disease is. Gum disease progresses in stages. Gingivitis is an early stage in which plaque (a combination of bacteria, mucus, and food particles) begins to build up and irritate gums. People with gingivitis have red, inflamed gums, which may be sensitive, and may bleed sometimes. Chronic bad breath is common with gingivitis. In some people, gingivitis can rapidly advance to periodontitis.

Periodontitis is the truly dangerous form of gum disease. In periodontitis, gum disease bacteria colonize the areas around your teeth, attacking your gums and the bone around your teeth. In response to the infection, your immune system ramps up its defenses, taking a “scorched earth” approach to try to defend the body against infection. In periodontitis, it’s not just bacteria destroying your bone and gums, it’s your own immune system as well.

This is when you experience receding gums, your teeth may get loose and start to drift. Your gums may bleed spontaneously. Eventually you will lose teeth. In addition, you are more likely to develop some of the overall health impacts related to gum disease, such as heart disease, dementia, diabetes, and some forms of cancer. The high-level mobilization of your immune system can also increase the risk of autoimmune disorders, such as rheumatoid arthritis, in which your immune system attacks your joints.

Gum disease is composed of two parts: the bacterial infection and your body’s response.

You Will Catch Oral Bacteria

While periodontitis itself is not contagious, the bacteria that are responsible for it can be passed through saliva to others, increasing the risk for that other person to develop the disease as well. The bacteria that can cause gum disease lives in the crevices and fissures between teeth and in gums.

Since oral bacteria live in saliva, they can be spread in any way that leads to saliva exchange between people. This includes:

The risk of contracting periodontitis via saliva transfer decreases if you:

Each ounce of saliva contains about four billion bacteria representing about 700 different species, so it doesn’t take much saliva for bacteria to cross over. The truth is that, over time, eventually you will share oral bacteria (and related gut bacteria) with anyone you live with: friends, family, and even their dogs.

Although it is essentially guaranteed you will catch oral bacteria from people you live with (though you’ll also retain some from your parents), gum disease isn’t about what bacteria you have. People with and without gum disease often have the same bacteria. What’s different is the balance.

You can help maintain a healthy balance in your oral bacteria by:

All the above steps give the upper hand to healthy oral bacteria. Deviating from these can encourage the growth of unhealthy levels of bacteria that encourage gum disease, and, eventually, the balance will tip in their favor. Once it does, those types of bacteria will reproduce uncontrollably, infecting your gums and setting off your body’s damaging immune responses.

The exact tipping point varies between people, and genetics play an important role in determining how susceptible you are to periodontitis. San Jose holistic dentist Dr. Nancy Nehawandian can help you find the right approach to managing your healthy oral microbiome.

If you find out you have developed gum disease, you have many options. The earlier you detect it, the easier the treatment will be. In the very early stages, better home hygiene and holistic dentistry-recommended lifestyle changes can be effective. Later, a thorough professional cleaning by a qualified San Jose dentist, along with the addition of a prescription antibiotic, mouthwash, or gel that fights the bacteria, may be enough. Later stages may require deep cleaning of the gums, which can be more invasive depending on the severity. Very severe gum disease might require surgery, including the extraction of one or more teeth.

The best treatment is, of course, prevention. San Jose holistic dentist Dr. Nancy Nehawandian emphasizes a comprehensive approach to gum disease that not only protects your gums and teeth, but your overall health. She can help you understand your personal susceptibility to gum disease and why you might need to take different steps to head off gum disease than other people you share a home with (and therefore share oral bacteria).

If you would like to learn more about gum disease prevention, please call (408) 354-5600 today for an appointment at Top Down Dentistry, serving the San Jose area from Los Gatos, across the street from Oak Meadow Park.